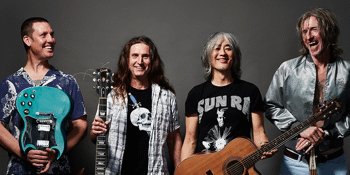 Sydney punk/alternative legends the Hard-Ons, who have shared bills with the Ramones and Nirvana, worked with Henry Rollins and influenced generation after generation of hugely popular Aussie bands, have been cranking out their own brand of punk rock for nearly 40 years now (yes, they started young!). And they recently announced the addition of a new member, one Tim Rogers of You Am I!.

Following the release of its first album 'I'm Sorry Sir, That Riff's Been Taken', the new Hard-Ons line-up will be hitting the road for a national tour. 'I’m Sorry Sir, That Riff’s Been Taken' is a stunning release that further reveals the Hard-Ons’ musicality and will surprise anyone who sees them as just a thrashy punk band. But it doesn't won't give fans anything to complain about, and nor will the new line-up's live shows; the magic in this union comes in part at least from the fact that Tim Rogers is one of those fans himself.

As Rogers told Blunt: “I’m a fan first and foremost. [They were] the first band I loved that I could see, the first band I got my nose broken to, [and the first band] I lost my hearing to. There are so many firsts. And then to be in the rehearsal room… I looked over at Blackie’s amp and went, ‘Oh, that’s the amp.’ And I saw the SG, and I was like, ‘That’s the SG.’ I’ve been watching him play with those since 1986."