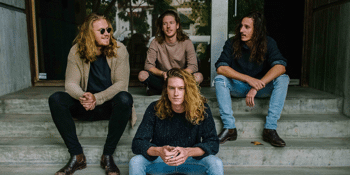 w/ special guests
The Cambridge - Warehouse (Newcastle, NSW)
Thursday, 25 February 2021 8:00 PM
40 days away
18 Plus
Rock
Send this event to
It has been an absolutely huge 12 months for The VANNS. With the release of their debut album Through The Walls, the South Coast band firmly cemented their identity as one of Australia’s most formidable names on the indie rock circuit. Now, with a new decade already kicking into gear, The VANNS announce they’re getting back out on the road this Autumn and to boot, they’re releasing a special new version of album track, ‘Jules Said’.

The new single, written by Jimmy Vann and Cameron Little expands upon the original album version, with the band hitting the studio with Grammy nominated, ARIA winning producer Adrian Breakspear (Gang of Youths, Pharrell Williams) to bring this new version of ‘Jules Said’ to life. “Jim and I wrote ‘Jules Said’ in my bedroom in under an hour. It was the first song we finished writing for Through The Walls. We were doing a lot of writing on Logic and trying to come up with ‘cool sounds’ for a while, and then we went out to lunch and were like, ‘When we get back, let’s just try and write something with two guitars and no computer’.” Cameron Little