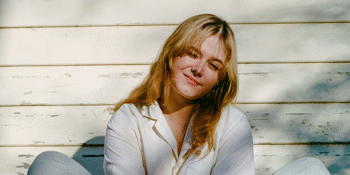 Ruby Fields has had a highly decorated ascent since her track “Dinosaurs” came in at #9 on the world’s biggest public voted music poll.

Two years after earning her well-deserved place in the triple j Hottest 100 in 2018, her fanbase only continued to grow. The same track, with all its blistering guitars and earworm hooks, placed at #84 in the Hottest 100 of the decade – an incredible feat for an artist who only uploaded her debut hit “I Want” to triple j Unearthed in 2017.

“Dinosaurs” has now amassed over 12 million streams across streaming platforms. The EP it’s lifted from, 2019’s Permanent Hermit EP, has clocked over 15.1 million plays on Spotify.

Meanwhile high-rotation hits like “I Want”, “P Plates” and “Ritalin” – lifted from her debut extended play Your Dad’s Opinion for Dinner in 2018 – all helped the EP clock over 12.2 million plays on Spotify.

Hailing from the suburbs of Sydney’s South Coast, Ruby Fields is an Australian singer-songwriter who creates narratives that people feel a close connection to. Her use of simplistic but poignant lyrics in her work has garnered the attention of the international music industry and fans alike. Combining indie rock chords with punk rock delicacy and delivery, it is easy to see why people started paying attention back in 2017 when she was played on triple j the same day that she uploaded her debut single “I Want” to Unearthed.

Since then, Ruby Fields has sold out multiple national tours, she’s performed to 20,000 people at Splendour In The Grass in 2019, toured the UK, performed a coveted Like A Version for triple j, and has been courted by labels in the US.

Still fiercely independent, Ruby Fields may be growing up in the public eye, but she’s got an impressive support network around her in the form of her band members Adam Newling (guitar), Tas Wilson (bass guitar) and Pat Rogers (drums).

For Ruby, lyrics have always been a major driver of her music. Fans the world over have obsessed over her lyrics due to how relatable and stirring her songs are. With her upcoming debut album currently in the works, Ruby is taking her passion for musical and self-exploration even further. Expect this burgeoning singer-songwriter to face the deeper and darker facets of herself and she becomes more self-aware with this debut long player.

The album was written largely from her farmhouse on a cliff edge within a Sydney national park after a soul-searching expedition to Nepal, and was recorded in Victoria, Byron Bay in NSW and in New Zealand. True to Ruby Fields’ style, it’s full of relatable anecdotes, festival mosh-worthy moments, escapism and humour, but also features previously unrevealed moments that divulge an entirely new side of Ruby Fields.

As Ruby Fields launches into the next phase of her career, her upcoming debut album primes her as not only a notable musician and songwriter, but also as a complex individual with emotional duality.