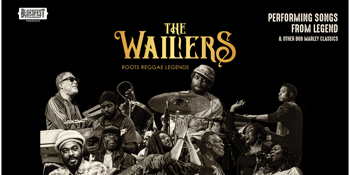 w/ Bobby Alu
The Cambridge Hotel (Newcastle, NSW)
Thu 16 April - Thu 1 October 2020 8:00 pm
18 Plus
Reggae
Send this event to
When Bob Marley instructed Aston 'Familyman' Barrett to ‘keep The Wailers together’ he made it his life's dedication.
Performing songs from Legend - the best selling reggae album of all time, spending 992 weeks on the Billboard Charts - as well as all the huge hits from Bob Marley’s incredible back catalogue; The Wailers conjure the spirit of reggae and the essence of the 70s rebellion performed by the people who helped forge the era-defining sound and by those raised under their tutelage.

Featuring  a stunning line-up of genuine reggae royalty – including heir to the throne, Aston Barrett Jr (son of the legendary ‘Familyman’), keyboardist Tyrone Downie, and Saxophonist Glen DaCosta; with Josh David Barrett achieving the seemingly impossible by stepping into Bob Marley's shoes on lead vocal.
Experience a real slice of musical history and heritage from those who keep the flame of Bob Marley alive.