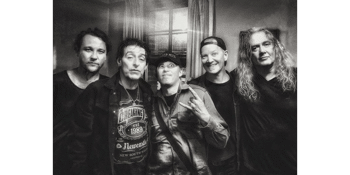 The Cambridge Hotel (Newcastle, NSW)
Friday, 27 November 2020 6:00 PM
29 days away
18 Plus
Rock
Send this event to
Born out of Newcastle in 1989, The Screaming Jets have been an enduring force in the Australian music landscape for over 3 decades. With 8 studio albums, (3 Gold & 1 Platinum) and more material on the way, The Jets have much to celebrate and a whole lot more rock to be rolled out.

8 albums released in 31 years, with the most recent original album ‘Chrome’ album, released in 2016 reinstating The Jets as a  ‘national treasure, Australians should treasure more…’ and receiving the Hot Metal Online coveted award ‘Best of Album’ of that year. Beating international releases from Dead Daisies, Cheap Trick and Metallica for the #1 spot.

2017 to 2019 has seen the Jets co-headline with their contemporaries (and some of Australia’s hottest rock acts) in The Baby Animals, Rose Tattoo & Boom Crash Opera whilst becoming a much loved fixture on everybody’s favourite rock festival Red Hot Summer.

The Screaming Jets radio history delivers a long line of high rotation hits to the airwaves. “Better” (penned by former member Grant Walmsley) was crowned by Triple M Sydney as the most played single by an Australian artist in its 37 year history. It’s been played over 10,000 times on Triple M since it’s release.


For over 30 years, The Screaming Jets have enjoyed high rotation for their songs on National Commercial Radio including: ‘Helping Hand’, ‘Shivers’, ‘Shine On’ ‘Stop The World’ ‘October Grey’ ‘Eve Of Destruction’, ‘Sad Song’, ‘Friend of Mine’ ‘Cash In Your Ticket’ & ‘Automatic Cowboy’.


July 2018 saw the release of the much talked about ‘Gotcha Covered’ covers album. A collection of 15 iconic Aussie songs spanning the mid 1960’s to late 1990’s, paying homage to a talented cross-section of Australian music history.

“Gotcha Covered…” offered up rebirthed Australian classics stamped with the unique sound that is synonymous with The Screaming Jets.   A #1 iTunes & Top 20 ARIA chart debut was achieved along with a consistent Top 5 position in the Australian Independent Record charts 4 months following it’s release.

Known as  ‘the last great Aussie Pub Rock Band..’, as at August 2020, The Jets alongside every other touring musical act in the world, are quietly working away waiting for the COvid-19 Pandemic to pass. The end of 2020 and into 2021, will see the band release a combination of re-birthed old and new material

This will be a huge celebration for the band that was once touted as Neil Jeffries, Kerrang Magazine “The Best Live Band I’ve ever witnessed..’