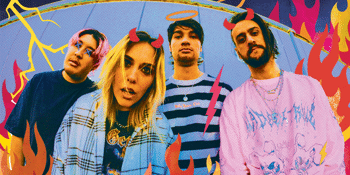 With Special Guests
The Cambridge Hotel (Newcastle, NSW)
Sunday, 3 July 2022 6:00 pm
8 days away
18 Plus
POP
Punk
Send this event to
Stand Atlantic doesn't care about your expectations or your narrative. They don’t want to tell a story. In fact, they didn’t want this bio to exist.

After the massive success of their debut album, Skinny Dipping, Stand Atlantic was set. They had written an album they were proud of called Pink Elephant, booked a sold out headline world tour, and they had plans. Then it all went to shit. 2020 hit everyone hard, but for the Australian four-piece, the prospect of putting out an album without being able to sing along with fans and feel the reaction to the songs was an anti-climactic let-down. Although Pink Elephant was their most successful album to date, charting on the Billboard Top 100 and UK Top 200 Albums for the first time, gracing the cover of Rock Sound magazine and winning “Best Breakthrough Artist” at the Rock Sound Awards, and seeing single “Blurry” hit #1 Most Played song on triple J Australian radio, the band faced the inevitable reality of the pandemic. They had to postpone, reschedule, and ultimately cancel, every tour over the next 2 years.

Fueled by frustration and defiance, Stand Atlantic ran back into the studio to write and record “deathwish ft. nothing,nowhere.” - a song that would become a “fuck you” anthem for the summer and the first collaboration between the band and alternative emo rapper, nothing, nowhere. Singer, Bonnie Fraser, had one thought when making the song, “Don’t be a little bitch to other people’s opinions, trust yourself instead, you'll be better than ever.”

Buoyed by the freedom and catharsis that the band felt by releasing “deathwish,” the band said “fuck it” to waiting for touring to come back, and ran back into the studio to record their new album, F.E.A.R. (which stands for Fuck Everything And Run). Instead of coming in with plans and expectations, Stand Atlantic threw all of those out the window. The result is an album that is raw, non-conventional, and undeniably free of starry Hollywood-style bullshit. “F.E.A.R. is an anti-concept album,” Fraser laments, “It’s a fuck you to the conventional bullshit Hollywood-style story that musicians tell you fell out of their ass.”

Opening with “Doomsday,” a song that Fraser admits starts the album off perfectly with the introduction of the absolute chaos that her psyche was going through and starts the haphazard journey of a very unromantic existence. “If you think I am a creative or a visionary, I am not.” Fraser asserts, “I refuse to be immortalized as anything other than a collection of erratic, irrational, and oxygen-starved emotions I wrote on a page just to be able to breathe.” This self-awareness and disdain for false pretenses and sugar-coating is prevalent throughout, ultimately showcased in the sing-a-long anthem, “pity party ft. Royal & The Serpent.” Bonnie and Royal & The Serpent’s vocals complement each other, yet contrast to form two distinct sounds. This juxtaposition surfaces throughout, further showcasing that life doesn’t make sense and doesn’t always piece together into a life romantic from start to finish.

F.E.A.R. was born out of chaos, frustration, and uncertainty. This album is for those who don’t fit the narrative, who see the cracks and exist in-between. It serves as a reminder that when you feel expectations are walking you down the wrong path, Fuck Everything and Run.